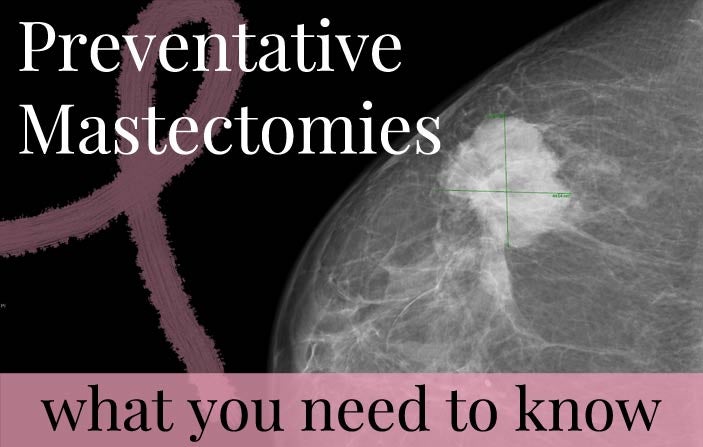 The power of celebrity goes a long way to increasing disease prevention and awareness. Case in point – actress Angelina Jolie’s candid, brave New York Times Op/Ed article (published May 14, 2013) in which she revealed that she underwent a double (bilateral) preventive mastectomy and breast reconstruction. Jolie carried the BRCA1 gene and her doctors advised her that along with her family history of breast cancer, this resulted in an 87% risk of developing the disease. Her mother and grandmother both died of ovarian cancer and her maternal aunt died of breast cancer less than 2 weeks after her article was published. In 2015, Jolie wrote another New York Times Op/Ed detailing her decision to remove her ovaries.

In 2008, actress Christina Applegate tested positive for a BRCA1 mutation, which influenced her decision to have a double preventive mastectomy. While her story was widely covered by the media, her BRCA1 mutation was excluded from many media reports.

A study by researchers at the University of Michigan published in April 2016 found that 17 celebrities publicly disclosed a breast cancer diagnosis and treatment between 2000 and 2012. During that time, the number of women who had prophylactic mastectomy at that institution rose nearly five-fold. The researchers found that 60% of articles on celebrities undergoing bilateral mastectomy for cancer did not mention genetics, family history, or risk. They suggest more women are choosing to have prophylactic mastectomy because of media coverage of celebrities with breast cancer and that women need more accurate information to weigh the pros and cons of having this surgery.

Specific inherited mutations in BRCA1 and BRCA2 increase the risk of female breast and ovarian cancers, as well as several other types of cancer. For women who have a BRCA1 or BRCA2 abnormality, the risk of developing breast cancer is between 40% and 85% or 3 to 7 times greater than in women without this mutation. Not all women from families that are known to carry the BRCA1 or BRCA2 gene have a harmful mutation. The PALB2, CDH1, PTEN, or TP53 gene mutations increase the risk of breast cancer, but to lesser degrees than the BRCA mutations.

Recommendations vary by medical organization. The Society of Surgical Oncology advises preventive mastectomy should only be considered in women at very high risk of breast cancer. This includes women with one or more of the following risk factors:

An October 2016 study revealed a fear of cancer recurrence and a belief that a double mastectomy is the best treatment for breast cancer as strong motivators for women undergoing preventive mastectomies. It is completely natural to feel a range of emotions including fear when you receive a breast cancer diagnosis. Experts advise it is important to understand all the pros and cons of any treatment or procedure before making a decision. This includes weighing the risks of surgery versus the benefits, how the procedure affects reconstruction options, and if the treatment will increase your chances of survival. It is crucial that patients and doctors make informed choices together that best address each individual’s unique situation.

3 Comment(s)
Mary
I've been contemplating removing my cancer free breast when I have my mastectomy. I believe I will have the genetic testing done before I make this decision. Thank you for this informative article.
Reply Oct 26, 2018 20:25
Russel Deleeuw
wow, awesome article post.Thanks Again. Much obliged.
Reply Dec 14, 2017 07:26
Jamal
Hi! This is my first visit to your blog! We are a collection of volunteers
and starting a new initiative in a community in the same niche.