Recent Posts
Blog Categories
Search Blog
Search blog
About This Blog
Inspiration and fashion tips for women. Empowerment for cancer patients, women with hair loss and anyone who wants to look and feel her best.
Blog Categories
Recent Posts
5 Best Face Masks for Coronavirus Protection | Surgical Masks for COVID-19
What is the Best Way to Cough & Sneeze?
3 Comfy Outfits to Wear at Home
5 Ways to Boost Your Immune System
Why You Should Eat More Berries (and 3 Berry Yummy Recipes!)
Can You Wear a Hat with a Wig?
Suggested Teas for Cancer Patients
Why did Men Wear White Wigs?
Does My Ponytail Cause Hair Loss?
Can I Wear a Wig to the Gym?
Subscribe
Receive our latest blog posts directly to your inbox!

Experts Weigh In On Trudeau's Eyebrows 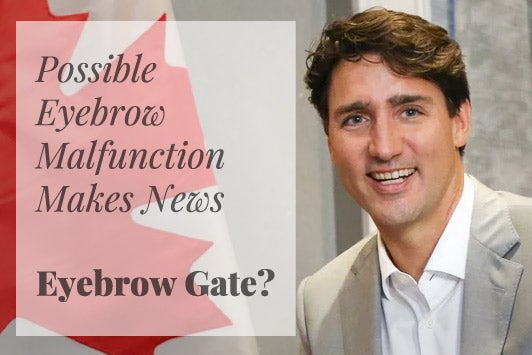 Yesterday, we received a 5 star product review for our men's false eyebrows. It read, "Great for G7. Especially good for standing up to hot TV lights." This got the ladies in our office talking. Did Justin Trudeau wear our eyebrows at the conference? We looked at photos of Trudeau online and quickly shrugged it off as a joke.

Then we saw a news article referencing his eyebrows at the summit. At that point, we knew it was our civic duty to re-open the case of the newly infamous G7 eyebrow malfunction, or, as it has been dubbed, "eyebrow gate."

If Trudeau was wearing false eyebrows, he would surely be wearing our Cardani eyebrows--the leading eyebrows in the industry. Made from hand placed human hair attached to a gel like backing, it's almost impossible to tell that they aren't real when worn properly. For this reason, we may never know the truth but we can offer our expert opinion.

First things first--famous people who order our products almost always do so under the name of an assistant. Even if Trudeau had used his own name to order our eyebrows, this is private information that we could never share. So we must rely solely on our knowledge of eyebrows to unravel this mystery.

We'll admit, if you look at photos and videos from the conference, it definitely appears as if his eyebrow is falling off. Could it be?

The reason we initially brushed off the theory that Trudeau wore our eyebrow wigs was that, upon looking at photos, we noticed his eyebrows are not the same shape as ours.

However, perhaps we spoke too soon; some people do cut the brows down and apply them to just one part of the eyebrow to add thickness. In this case, it would be the bottom quarter of the Canadian Prime Minister's eyebrow, which is obviously thicker than the rest of his brow.

We dug deeper. After examining multiple photos of Trudeau's newly infamous brows, we saw that his eyebrows consistently look the same. As mentioned, they are clearly thicker and darker at the base, and thinner and lighter near the top. Additionally, he has deep set eyes which cast a shadow. This could have created the optical illusion of his eyebrow falling off.

So what's the verdict?

All things considered, it seems that this phenomenon was nothing more than poor lighting tricking the eye. What do you think?

Check out an awesome selection of eyebrows and eyebrow products here!