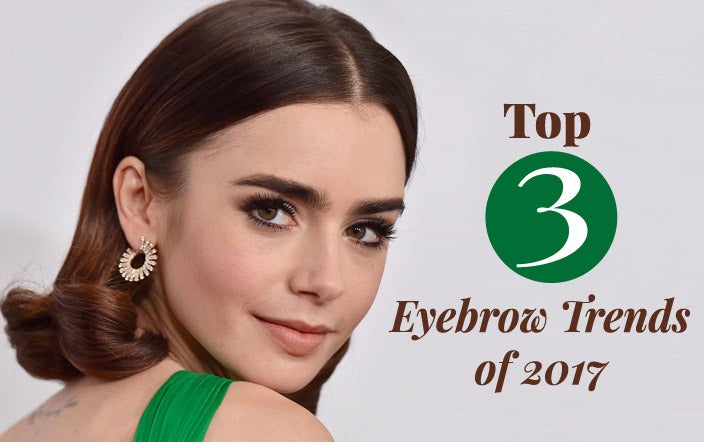 So when did eyebrows become such a huge fashion trend? Many beauty experts credit actress and model Cara Delevingne’s remarkable eyebrows with ushering in the decade of eyebrows in much the same way as Twiggy’s false eyelashes and mod eye makeup set off a craze in the 1960s. Keep in mind eyebrow trends are fleeting; new and often outlandish concepts are introduced continually and what was hot yesterday may be passé by tomorrow. Here are our picks for the three best and three worst 2017 eyebrow trends.

If you like making bold fashion statements with makeup and don’t want to alter your brows, this is a fairly easy look to recreate. You can achieve an ultra-dramatic arch with patience, eyeshadow, and eyebrow wax.

Many celebrities have opted for this trend, making it the hottest brow look right now! Keep your natural brows groomed by only plucking stray hairs on the bridge of your nose and above your eyelids. You can use clear or tinted eyebrow wax or gel to shape unruly brows.

While microblading became a huge trend in 2017, we recommend removable temporary eyebrow tattoos. They only take a few minutes to apply and remain in place for up to 10 days.

The question is, WHY? This style literally looks like little hills and valleys or wiggly lines. These brows have been dubbed everything from stupid to strange to bizarre! Eyebrows provide you with multiple expressions, but these say, HUH?

Eros Gomez, a 17-year-old makeup artist from Los Angeles started this crazy trend with a Photoshopped image of his own faux “braided” brows. When he actually attempted to do this, it didn’t work, and you have to assume as a guy, Gomez has much thicker brows than most women! All and all, this is a pretty impractical trend.

Finnish makeup artist Stella Sironen invented this trend as a joke by parting her eyebrows in the middle and waxing them down to create the look of a feather. She then took to Instagram and let her feather brows fly free. She did not expect the world to love her new "funny brow trend" and "take it seriously." But this is the internet we're talking about here, guys. This trend is fun, it's artsy, it makes a cool picture to post on social media, but it's definitely not flattering.

What do you think of the top eyebrow trends of 2017? Which looks do you like? Which ones do you hate? Please comment below.

Selecting the Most Flattering Eyebrow Shape

2 Comment(s)
Melbourne Makeup Artist
Very nice article on different eyebrow trends, Thanks for sharing it. Thick and curved eyebrow look so beautiful and in these days eyebrow tattoos are most trendy and easy way to get the fine and permanent shape for brows.
Reply Dec 29, 2017 21:59
BEATRIZ CHANDLER
The Three Worst Trend is UGLY.
Reply Oct 20, 2017 16:42
Copyright© 1994-2020, Headcovers Unlimited, Inc. All Rights Reserved.