Recent Posts
Blog Categories
Search Blog
Search blog
About This Blog
Inspiration and fashion tips for women. Empowerment for cancer patients, women with hair loss and anyone who wants to look and feel her best.
Blog Categories
Recent Posts
What is the Best Way to Cough & Sneeze?
3 Comfy Outfits to Wear at Home
5 Ways to Boost Your Immune System
Why You Should Eat More Berries (and 3 Berry Yummy Recipes!)
Can You Wear a Hat with a Wig?
Suggested Teas for Cancer Patients
Why did Men Wear White Wigs?
Does My Ponytail Cause Hair Loss?
Can I Wear a Wig to the Gym?
10 Tips for Cancer Recovery
Subscribe
Receive our latest blog posts directly to your inbox!

Why did Men Wear White Wigs? 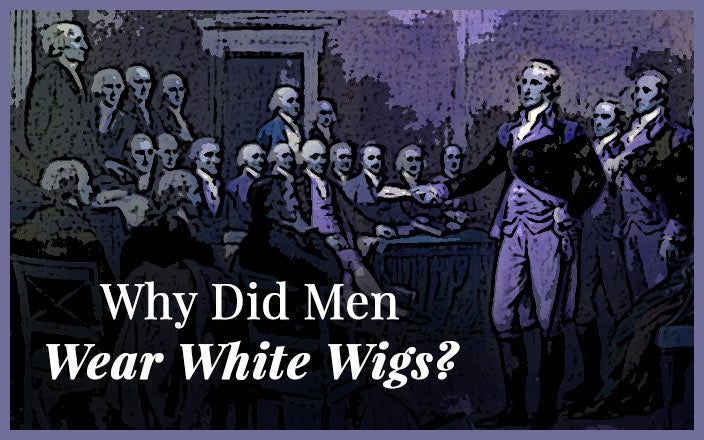 We all know fashion goes through phases. You start a decade out wearing giant hoop earring and sporting “the Rachel” hairstyle; by the end, you’re wearing skinny jeans and transitioning from thin eyebrows to full and shapely. While reflecting on the fashions of yesteryear can be wild, going back even further through the last 300-400 years is a real trip. Let’s take a look at our founding fathers, for example. One of the major fashions of that particular time period was donning the powdered wig, complete with curls, braids, and general puffiness not seen again until the surge of hair spray sales in the 1980’s.

However, the big question is: Why? Why did men wear white wigs? Why was the powdered wig such a social staple in the late 1700’s and early 1800’s? Were powdered wigs on men considered cool for the time? And was George Washington really the first US President to wear a powdered wig? Keep reading to find out! (Spoiler Alert: No, he was not)

Contrary to popular belief, George Washington never actually wore a powdered wig. That glam style you see in paintings? That was all his biological hair. George Washington’s hair routine consisted of curling and braiding his own hair everyday.

While no one knows exactly where the lies began regarding George Washington sporting a hairpiece, one thing is true: George Washington did not have white hair. His actual hair color was more of a reddish brown or chestnut shade. George Washington actually powdered his hair white to stay “hip” with the times, as white hair was considered extremely fashionable.

Why Did Men Wear Wigs in the 18th Century?

Wigs in the 1700-1800s were normally crafted using horse, goat, or human hair. According to historians, wigs made from animal hair were especially hard to keep clean and attracted lice. However, wigs were still seen as an attractive alternative to coping with a lice infestation on your own scalp. A wig could easily be deloused by sending the hairpiece to a wig maker, who would boil the wig then remove any remaining nits. Thank goodness!

But the main reason why wigs were popular? Wigs and hair powder originally became popular by Henry IV’s son Louis XIII in the mid-1600’s. Louis XIII paired brown powder with a long wig to cover up balding resulting from syphillus, causing other prominent members of society to follow suit.

Why Powder the Wig?

While the paintings we see today depict men in floofy wigs giving off a majestic, commanding appearance, the wigs were difficult to keep clean and actually smelled really bad. Enter: hair powder. Hair powder consisted of flour or starch and could be dyed various colors depending on an individual’s wants or needs. The powder could then be scented with various roots and flowers, such as citrusy orange flowers and lavender. No more smell!

Over time, white became the most popular hair powder shade in high society as it had the added bonus of portraying a defined, more mature appearance. White powder worked to intensify the blondeness of lighter hair shades, while giving darker hair a grey appearance.

So Which of Our Founding Fathers Did Wear Wigs?

Actually, four Presidents were said to have donned powdered wigs. They were:

Interestingly enough, powdered wigs began to fall out of popularity during the 1790’s and were then considered old-fashioned. But the moral of the story here is: If you find a style you love, don’t let the world tell you not to wear it just because it’s considered “out of style”. Just remember: If the founding fathers could pull off powdered wigs past its fashion expiration date, you can pull off anything! You can shop a full selection of (modern!) wigs at this link!