Recent Posts
Blog Categories
Search Blog
Search blog
About This Blog
Inspiration and fashion tips for women. Empowerment for cancer patients, women with hair loss and anyone who wants to look and feel her best.
Blog Categories
Recent Posts
How Long Will We Need to Wear Face Masks for Coronavirus?
5 Best Face Masks for Viruses | Good Anti Virus Masks
What is a Beanie Hat?
Should I Tell People I Am Wearing a Wig?
How to Buy Wigs that Look Real
Monofilament Wigs for Cancer Patients: Are They Right for You?
Best Smoothies for Cancer Patients
25 Inspirational Mother's Day Quotes to Share
10 Ways to Cope with Depression and Anxiety from Coronavirus
20 Indoor Hobbies to Learn at Home
Subscribe
Receive our latest blog posts directly to your inbox!

What is a Beanie Hat? 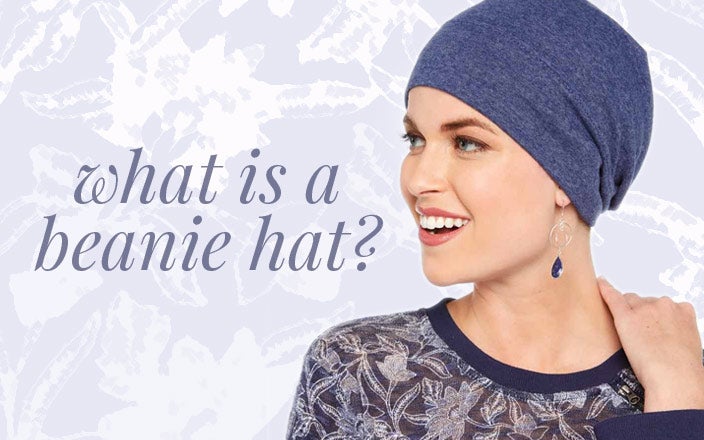 We’re all familiar with the beanie cap we know and love today. But have you ever wondered where the beanie got its start? Read on to learn the curious beginnings of the beanie cap and other uses for beanies beyond the fashion scene.

What is a Beanie Hat?

History of the Beanie

Before the 20th Century

The traditional use of beanie-type caps is simple: keeping the head warm in cold weather. Because of its essential function, hats in this style can be found independantly in many regions with a cool climate throughout history. In fact, even the vikings wore knit caps. Starting in the 1700s, wool knit caps were popular among fisherman, hunters, and other outdoor-workers.

How the Beanie Got Its Name

Speculation still exists about how the beanie cap got its name. Most therories suggest that the beanie cap was named after the head itself, which was often referred to as a “bean” in the early 1900’s.  Another theory suggests the name “beanie” originated from the top button that originally secured the gathered fabric together, which was about the size of a bean.

In the early 1900’s beanies were often worn by blue collar laborers, which included welders, mechanics, and other tradesmen. Beanies kept hair from getting in the worker’s face and offered sun protection for the scalp and ears without getting in the way.  Some beanie designs did come equipped with a small, 1 inch deep brim addition. Interestingly enough, these brimmed beanies were the starting point for the modern baseball cap we know and love today.

At this time, beanies were also handed out to college freshmen at U.S. universities, making them associated with college students. While not its intended purpose, this practice often became a form of hazing; upperclassman would bully freshmen who took off their beanies. In some colleges, freshman would burn their beanies at the end of the school year during an annual bonfire. By 1960, this tradition was no longer followed at most schools.

As baseball caps began to rise to popularity in the early 1940’s, beanies became less popular. A brief rise in fame for the beanie hit in the late 1940s thanks to the introduction of propeller beanies in science fiction. The propeller beanie was initially created as an image of self-mockery as science fiction fans were perceived as childish. As comic books and other forms of science fiction media began implementing propeller beanies into their work, the popularity for this specific beanie style briefly increased and is still sometimes used today for satirical purposes. The 1950’s brought the beanie back into play as a cap for college freshman, usually as part of a hazing ritual or to spurn rivalry between odd/even class years.

From the 1960s onward, the beanie cap increased in popularity. Marvin Gaye's signature red beanie led to a beanie-boom in the 1970s. Jack Nicholson's black knit cap in 1975's "One Flew Over the Cuckoo's Nest" also added to the beanie hat's appeal. Beanies picked up even more traction as a fashion accessory in the 1990s; they were often worn in grunge and skateboard culture.

Today, beanies have become a staple for just about any fashion style, winter weather apparel, and a way to show off your individuality with various colors, logos, and your fave team emblems.

For those with hair loss from chemo, alopecia, aging, and other reasons, beanies are a great everyday option; they're soft against the head, provide warmth, and have a perfect casual look. Shop beanies for hair loss here.

Additionally, beanies are often used in the working world. Factory workers, those working with heavy machinery, and those in the food industry all use beanies to keep hair away from the face in a comfortable way. Slouchy beanies are especially popular for this purpose.

Beanies have a colorful and interesting history that spans thousands of years! What do you think of the beanie cap or its history? Tell us in the comments section below! Click here to shop a full selection of beanie hats.